This 121-year-old act is keeping railroad workers safe. Do you know the eight safety features that all cars and locomotives must include under the RSAA?

In 1893, Congress enacted the Railroad Safety Appliance Act (“SAA”) to provide a set of federal safety standards for trains used on railroad lines across the United States. At the time, railroad workers had one of the most dangerous jobs in the nation, and the SAA was designed to decrease rising workplace injuries and deaths on American railroads by requiring that each locomotive and/or railcar be equipped with certain basic safety features, including automatic couplers and air brakes. 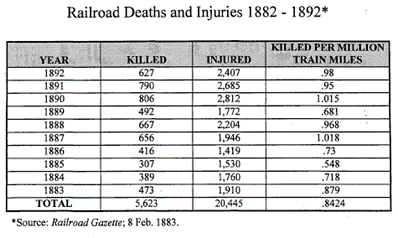 The SAA took effect in 1900 and has been credited with a sharp drop in injuries in the early 20th century. According to the article, “Lives and Limbs Saved by Automatic Couplers,” published in 1910, the Railway Age Gazette found that between 1893 and 1908, deaths decreased by about one-third even as the number of trainmen increased significantly during that same time.

The SAA’s original safety requirements remain in effect today with some modifications over the years. The current version requires the following eight safety features for all cars and locomotives placed in service on railroad lines:

Although these safety laws have successfully reduced injury events, they still happen when a railroad fails to provide adequate train equipment. For example, if a pin lifter does not work properly and a trainman needs to go between two railcars to open a knuckle, the condition of the railcar violates the SAA. If a handhold breaks while climbing on or around a railcar or locomotive, the SAA is violated. Such a violation of an absolute duty and creates strict liability negligence on the part of the railroad. In such cases, the railroad’s reasonable care to prevent the failure is not a defense. Importantly, the railroad’s liability can not be reduced even if the worker was contributorily negligent if the injury happened while the equipment was being used. That liability does not apply if the equipment is being inspected or repair at a maintenance shop.

If you are injured after using defective equipment, it is critical to contact an experienced railroad attorney who can help evaluate whether you have a compensation claim under the SAA or one of the other railroad safety laws designed to protect railroad employees from dangerous conditions.

As reported by various sources, Schlichter Bogard & Denton on May 16, 2022 filed suit…